Despicable Me and the Vitriolaters 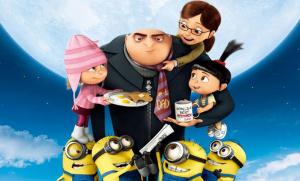 I love the Despicable Me movies.  The minions crack me up.  And Gru–you have to love a guy who works so hard to be so bad only to find out that he can love his adopted daughters with a heart-melting kind of love.

But Gru is the focus of the “despicableness” of the Despicable Me movies.  In fact, I would go so far as to say the recent Minions movie (without Gru for 99.9 percent of the screen time) just didn’t quite reach the same level of, well, despicableness.

As opposed to, say, me: because while Gru tries so hard to be bad without being able to pull it off, I try so hard to be good, but I cannot even get close.

That brings me to this:

I have been in and out of pastoral ministry for a couple of decades.  I have had my share of high intensity disagreements with folks who thought ministry should be done differently or who disagreed with me about something I had done…or hadn’t done…or had done but hadn’t done to their satisfaction, etc.  Once or twice the accusations rose to the level of acrimony.  But, in most every case, on the other side of the acrimony, there was usually a level of reengagement and forgiveness and reconciliation.

But I have reached a new level in my pastoral career–it turns out that I am now–wait for it–“despicable.”  It was the actual word used in an actual email from an actual person to describe the actual me.

Yea, that’s right, your gutless! I think you’re so gutless, in fact, that you won’t even have the nerve to read this through without cutting me off again. That’s how much of a gutless coward I think you really are.

It’s Pastors like you who expect high pay to fulfill positions of sacrifice and who make me want to puke. You’re ability to bring the worst out in people is real and that should tell you that you’re not fit to be called “Pastor.”

Now, I have written elsewhere about recognition of not just my tendency toward, but my regular wallowing in, my own sin.  My spirit echoes the Apostle Paul’s angst:  “For, I have the desire to do what is good,” Paul says, “but I cannot carry it out.  For I do not do the good I want to do, but the evil I do not want to do–this I keep on doing…What a wretched man I am!  Who will rescue me from this bondage to sin and death?” (Romans 7:19 & 24).

I must find my rescue in exactly the same place that Paul found his rescue, “Thanks be to God, who delivers me through Jesus Christ our Lord” (Romans 7:25).  It is there (and only there), accessing the full resources of the Trinity, that I begin to wade my way through and out of the muck and spray of sin that I exude on a regular basis.

So there is some truth in the “despicable” label.  But not the kind of truth spewed by the above “Vitriolater” (yes, I made up a word to describe those who spew vitriol).  So the Vitriolaters are often right…just not in the ways they think they are.

Many others, much wiser than I (if you’d humor me by accepting the premise that I might be, in some small way, “wise”–and not in the “wise guy” way of being wise), have attempted to ferret out why intensity of faith can result in the venomous spew of the Vitriolaters.

Marshall Shelley wrote Well Intentioned Dragons (in 1985) about people who are extraordinarily critical but who, at their core, genuinely seem to want the best for the Kingdom and its people.  But Vitriolaters are not “well-intentioned.”  They aim to destroy.

The trouble with the Vitriolators?  They think they’re right…about everything…all the time.  And they may sometimes be right in seeing the sin; but they are always oh so wrong in their thinking that they have been deputized as “Assistant Holy Spirits” to so flagrantly berate us sinners.

Is there need for genuine accountability in the Body of Christ?  Absolutely.  But it is “wounds from a friend that can be trusted” (Proverbs 27:6), not improvised explosive devices from the Vitriolaters.

Vitriolaters elevate their opinions to orthodoxy.  “Speaking the truth in love” seems to be beyond them.  Hungry to hear their own voice and hungry to have their voices validated by others, the Vitriolaters develop a streak of viciousness that seems to relish the prospect of proving themselves right at another’s expense.

Vitriolaters, it seems, eventually become idolaters–they worship their own “truth” instead of the One who is Truth.

What do we do about Vitriolaters?  Forgive them?  Pray for them?  Turn the other cheek?  Go the extra mile?  Give them our cloak too?  Yes, all of those things.  But beyond those things, as stewards of Christ’s Church, we must also do what the Bible also says about tending to the health of His Church, “Warn a divisive person once, and then warn them a second time.  After that, have nothing to do with them” (Titus 3:10).

Carefully, in the company of seasoned, spiritually deep church leaders, we must warn them and warn them again and then we must let them go.  Just as Gru would do anything to protect his girls, we must do everything we can to protect the integrity of Jesus’ first love: His Church.

Yep…I am despicable.  Now, if I only had some minions.

© 2015, All rights reserved.  Scriptures from the New International Version (Zondervan).