I Am an Orphan Now

I am an orphan now.

Dad has left us…following Mom by just under two years.  He barely made it past what would have been their 61st wedding anniversary.  I had seen him a mere week before on a two-day “drive by” enroute to new jobs for me and my wife.

I usually associate the word “orphan” with youngsters.  Images of Dickensian waifs from 19th Century novels waft through my mind.  I am by no means minimizing the trauma of growing up without parents in the picture–or the loss of parents at tender ages.  But when I tried to label the dagger of feelings that sliced through my heart as I heard the words, “Dad’s dead,” this idea slapped my mind: I am an orphan now.

I am not alone in this, of course.  My two brothers and so many millions of adults who have lost both parents share this orphanhood with me.

It feels like the stake has been finally driven into the heart of “kid-dom.”  Though I haven’t doubted since I was a smart aleck 16-year old (with a shiny, new driving license) that I was an adult, I don’t have parents around anymore.  Mom’s caring attention was always there; Dad’s wisdom was always there, even if I didn’t think I needed it.

Dad and Mom had pulled beautiful lives together from what could have been disaster.  Dad’s own mother purportedly committed suicide when he was a very small boy (though Dad was increasingly skeptical about the suicide story).  Dad was fostered out and only reunited with his own father and brother after a new stepmother insisted that it be so.

Mom suffered from crude attempts at mental health treatment as a young girl.  When they found each other, Mom and Dad brought together a rarely spoken but driven commitment to nurturing their own family such that my brothers and I were blessed (in the most profound way) by their love and presence.  What could have become gross dysfunction turned into an environment of health and care and love.

Mom’s and Dad’s spirits first intertwined at an old-fashioned, drug store soda fountain.  Dad was the “jerk” (no, not that kind of jerk–the milkshake-making kind of jerk).  Mom came in with two of her friends and she caught Dad’s eye.  Up until the very end, whenever Dad talked with me about how he and Mom had met, he bragged about putting extra ice cream into Mom’s coffee-flavored milkshake.

Norman Rockwell did a painting of them–ok, it’s not them but, when Dad saw Rockwell’s rendering of kids hanging over the soda fountain counter, he got tears in his eyes.  He hung the print in his dining area and it became a mental time machine–dissolving the decades and transporting him right back to when his and Mom’s eyes first locked. 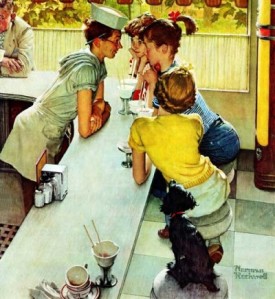 He wasn’t the same after Mom passed on to the presence of the Lord.  The two really had become one (in that Genesis 2:24 kind of way) and Dad seemed both adrift and alone in ways that I could see and hear but could not fathom.  Encouragement from his kids to get out and about, to do something (anything) with his time, was met with indifference (and sometimes grumpiness).  It seems now, at least to me, that he was hungering to be with Mom, longing for the Mom-shaped hole in his life to be filled once more–and that nothing here could do that.  The two had become one; so now he was just half.

I think he did try a bit…he learned to text with a semi-smart phone and, at age 81, took his first selfies.  Texting was often better for him as his jet-engine-noise (and increasingly) impaired hearing from his Air Force days made conversations more and more difficult.  He texted with his kids and grandkids and great grandkids.

But Dad is now gone from this life.

He won’t vote in the 2016 election.  Like many, he had been bemused by the ever growing, rampaging horde of candidates.  He won’t be watching O’Reilly faithfully every evening at 8:00 p.m. Eastern Time. (If I accidentally called during that “sacred hour,” he would hurry me along off the call.). He won’t be the occasional “Correspondent of the Week” with his letters to the Editor of the local paper.

He won’t be scrupulously attending to Mom’s silly little dog anymore (he had promised her that he would…and he kept that promise till his last breath)–the doggy maintenance will fall to someone else.  And he won’t be experimenting with Roku or searching for Foyle’s War on Netflix.  He won’t be gathering with my more proximate brothers for Friday night movies and pizza (I am so thankful for them being physically present with Dad when I couldn’t).

He won’t be there when I call; I have deleted my daily calendar reminder to “Call Dad.”

He just won’t…be around, that is.  I am an orphan now.

“Sing to God, sing in praise of his name, extol him who rides on the clouds; rejoice before him–his name is the Lord. 5 A father to the fatherless, a defender of widows, is God in his holy dwelling” (Psalm 68:4,5).

© 2015, All rights reserved.  Scriptures from the New International Version (Biblia).

Christ follower, husband, son, father, grandfather, step-father, brother, friend, pastor, teacher, blogger. END_OF_DOCUMENT_TOKEN_TO_BE_REPLACED
This entry was posted on Monday, August 17th, 2015 at 7:35 am and tagged with adult, air force, Bible, Christian, comfort, dad, dads, father, fatherless, Jesus, orphan, rockwell and posted in Uncategorized. You can follow any responses to this entry through the RSS 2.0 feed.
« Yes, the Church Definitely Stinks! Letter to an (Absent but Vocal) Church Critic…
Under the Dome and Other Closed Systems »

4 responses to “I Am an Orphan Now”